So I have a relatively simple scenario connected to a sheets webhook.
The trigger is a watched cell (K7) value becoming ‘DUE’ in sheets, which activates another cell (N7) with this function:
=IFERROR(IF(K7=“DUE”,INTEGROMAT(B7,C7,G7,L7,F7),“monitoring”),“sending to MAKE”)
This works great, when the value of K7 becomes ‘DUE’, the formula sends information to MAKE and triggers the scenario perfectly. The scenario runs daily.

My issue is that the webhook keeps triggering. To solve this, I added a final operation in the Make scenario to overrite the above cell function with plaintext, to close the loop and prevent repetition of the trigger after the first instance. So once K7 becomes ‘DUE’, the IF function sends data to Make and then is ovewritten once the scenario completes.

However, the scenario instead continues to trigger each day, behaving as though the above function were intact even though it has been deleted.
Screenshot of data bundle sent to Make scenario by a cell that no longer contains the webhook function 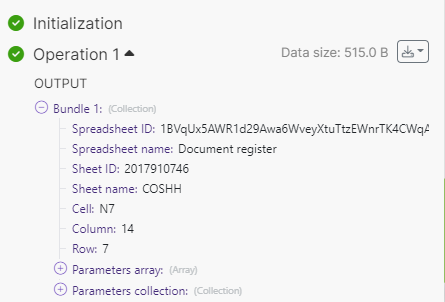 Can anyone explain this odd behaviour?