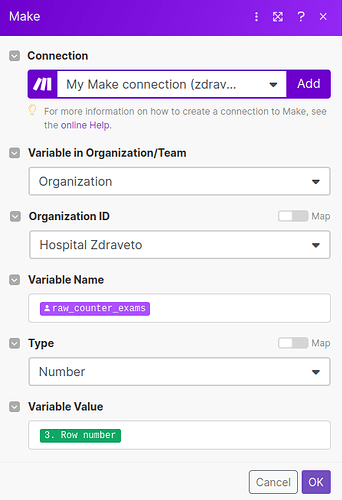 image448×654 35.1 KB
The error I get is this:
The operation failed with an error. [400] Bad Request: Validation failed for 1 parameter(s). ◉ Error: Value doesn't match pattern in parameter 'name'.
I have no experience in programming and Google can’t help me with this issue.
Thank you for the great tool Make.com Team.
Florian January 18, 2023, 2:20pm 2

No that doesn’t seem to work either @Florian. The documentation on the Update a custom variable is very open about what you put here and says you can “Select or enter the variable name” but that is clearly not true and doesn’t work if you do either. 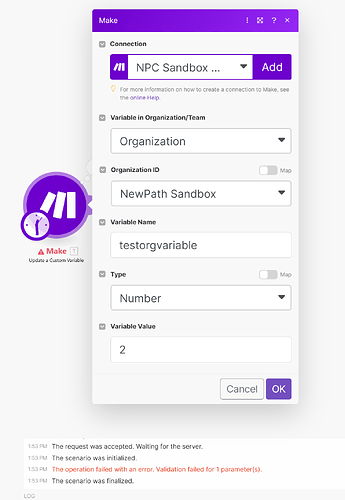 But the Make app has a Make API Call so let’s use that instead since I think there’s a bug in the Update a Custom Variable module. Here’s the API documentation for updating a custom variable on an organization.

I blurred out the organization ID in the URL path. The variable name goes right into the URL, and also note the Method and Body. Method is PATCH and Body is a simple JSON collection that has the new value.

You can update the name and type with this call as well with a more complex body which includes name and typeid.