I created automation for Shopify about 2 weeks ago. It was doing great for what I needed. This morning, I realized in my Shopify dashboard that Make is no longer supported by Shopify. Is this a bug or is there a way around this?

Is Shopify no longer available in Make?

Hi. May you send us a print screen about this warning in the Shopify Dashboard?

If you need additional support, please don’t hesitate to reach out.

Hi @EPGLFG It does seem that the App inside of the Shopify store is indeed “Unsupported” and might have to be updated by Make.
We have multiple Shopify customers where we build and maintain their integrations for, but they are all still working correctly. So I don’t think this is a big issue, but I have also forwarded this at Make to see if they are on this issue. 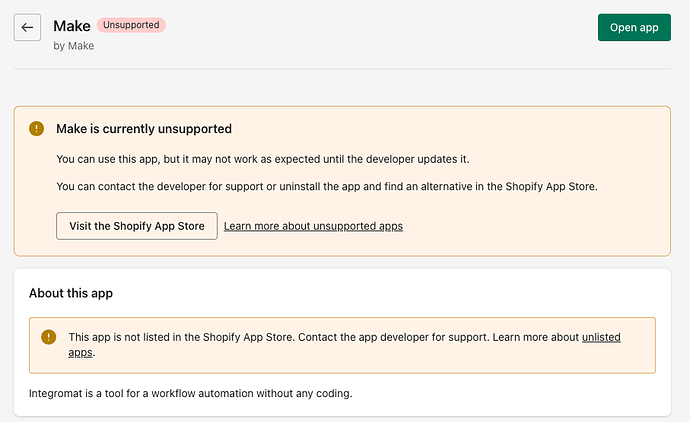 I have the same problem.

" This app is no longer available on Shopify and can’t be installed. You may be able to find similar apps in the Shopify App Store.

Talked with the support team and this shouldn’t affect anything. Looks like this has been like this for a while already so don’t worry about it

Unless you/we are getting some real errors it’s all good.

But it really does matter - as you cannot set up new connections. It simply won’t let you install on the Shopify end.

What do you mean @Ronan_McGrory ? You shouldn’t “install” Make, but just create a connection for shopify within Make.
If you get an error please share that here in a screenshot.

Hello,
same problem here, and we now lose connections to a large number of stores. 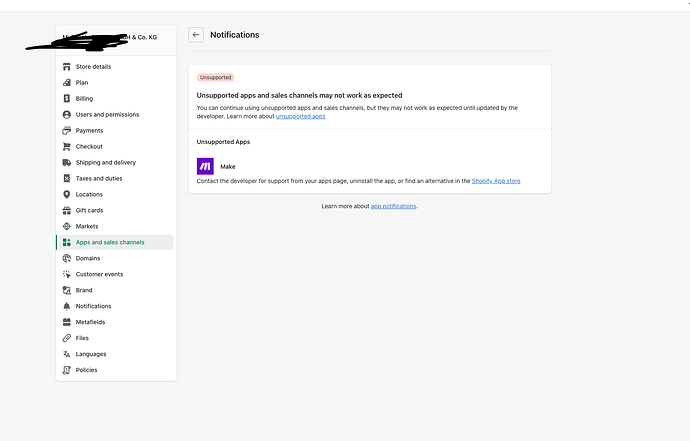 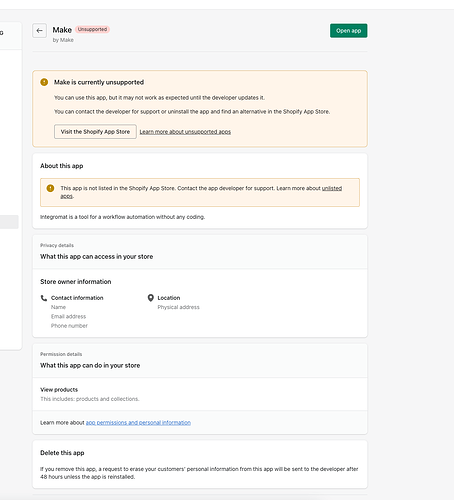 Hallo,
a new installation is also no longer possible! Neither an update of the app, nor anything else.

@philippF-RT Can you show me the errors in Make? Losing connection & not being abel to create a new one?

I am surprised that the problem is not known here in the community. In the meantime, the error has been confirmed by support. And I am massively shocked and disappointed for the MISTAKEN communication from Make.com to such an elementary problem.
It should be no problem to customize the help documents, or make a community/help post here. Or a newsletter.
But to keep silent about this problem is dilitant and a sign of poor and deficient corporate management.

> Hope you are doing great!
> Thank you for getting in touch with our care team. I’m Amitesh on this side and I’ll be helping you with your ticket today.
**> **
> This issue has been brought to our attention, and the Make app is undergoing an official review by the Shopify team before being accepted.
**> **
> The Shopify team recently notified us about some findings that were not compliant with their API policy, and they refused to extend the review period, so they temporarily suspended the Make app from the listing as well as the option to create new connections with them.
**> **
> The limitation applies only to new connections - existing connections are not affected by this limitation.
**> **
> Currently, we are working on immediate fixes and consulting with the Shopify team to resolve these issues as soon as possible so that the review can be passed.
**> **
> A Workaround is available, however:
> You will be able to create a custom app in the Shopify app store that will allow you to set up a connection with your Shopify account. The supporting documentation contains the steps you need to follow in order to create the connection:

Hey Community, thanks for your engagement here, philippF-RT and everyone who has commented.

We are sincerely sorry we did not communicate this here earlier. Without resorting to excuses, you are right, we should have posted in the community and this was a mistake, we were focused on resolving the issue and should have spent some time making the community aware and updating you so there were no assumptions or additional negativity. We will learn from this and genuinely appreciate your feedback and comments.

As far as the issue itself - The Make App is currently under review by Shopify, which changed the approach and requirements for Apps listed on the App Marketplace. We are working on it as a priority.

We appreciate your understanding and bearing with us while we resolve this issue and we will update you once we have more information.

Just in case you weren’t aware - this tweet dropped today. ONly mentioning in case you want to hold off until everything is working again. 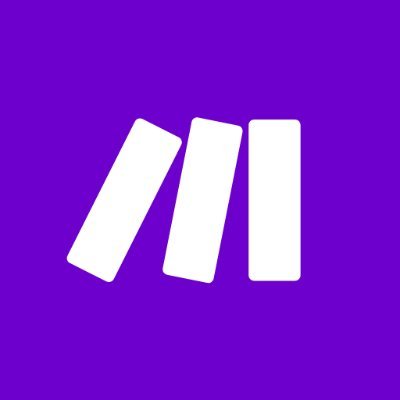 Hey @IainM - Thanks for flagging this! Marketing has been made aware, and Shopify marketing activities are being paused until all is resolved!