Asking chatGPT to compose "Integromat" blueprints... And this is the result

It was worth a try asking ChatGPT to compose an Integromat blueprint.

(Using Integromat because the model doesn’t know about the rebranding to Make as it’s data cut off in 2021.)

However… ChatGPT put in its best effort to help you. 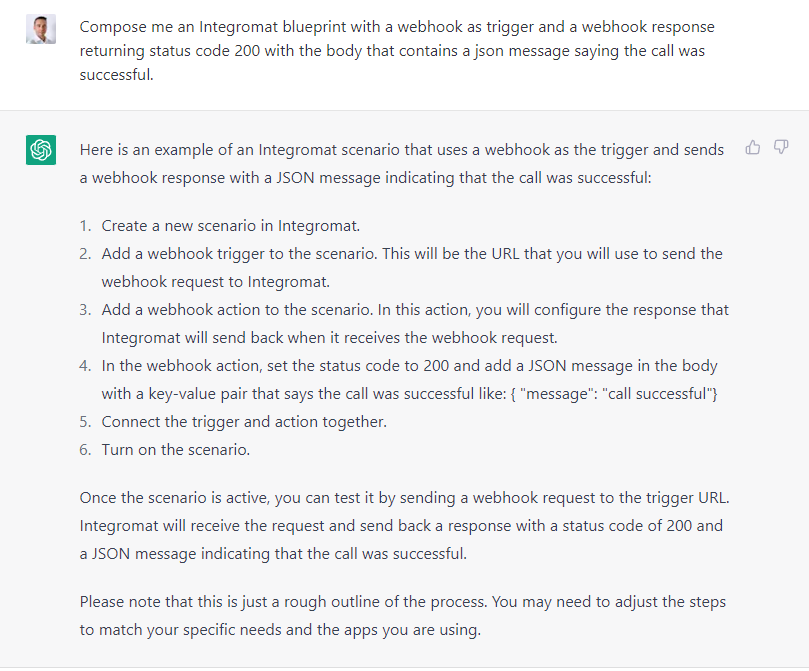 Pretty impressive considering the ChatGPT was not even tuned for this at all. The fact it can return something that makes mostly sense is already amazing.

OpenAI GPT models are not multimodal yet but when they are in theory one can train GPT with all the modules, names and pictures so it can compose a picture of the scenario which by itself would be marvelous.

By the way the OpenAI playground is what the Make OpenAI app uses, not exactly what ChatGPT returns. Here’s a similar interaction in the playground with Maximum length set to 4000

Create an Integromat blueprint with a webhook as a trigger, a webhook response returning status code 200 with a JSON body that contains a message saying the call was successful

This on the other hand is a pretty big fail:

What do you know about Integromat blueprints?

Integromat blueprints are pre-defined templates that help you create automated workflows in Integromat. The blueprints allow you to quickly and easily create workflows using Integromat’s drag-and-drop visual designer with sample data and integrations. Each blueprint contains a step-by-step guide and example data to get you started quickly. You can also easily customize the blueprints to fit your needs.

This is incredible stuff, really! Makes me feel as though we’re living in a sci-fi novel

Thanks so much for bringing this topic to the community!